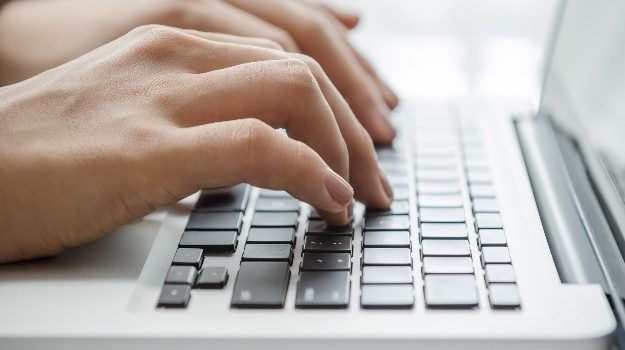 Typing Tests – which test is the best?

An article by Emily Fagan, Researcher for TP Transcription Limited.

To start with I’m not a very fast person typing at all and I tend to make quite a few errors, which I appreciate will rule me out working as a transcriber for TP Transcription Limited! To successfully work in transcription you really need a typing speed of about 70-80 words per minute and be able to transcribe with an accuracy level of 100% for clear audio.

Most of the typing I did before quarantine involved my iPad to do homework. However when I started doing online learning I began to have to type long essays in an hour to send in so it became impractical and I began to use a keyboard.

Use a Keyboard with an iPad – a no brainer

To start with I was quite slow but over the past few months my typing speed has improved and I also did an online free typing course. The typing course taught me about not looking at my hands whilst typing but looking at the screen and the correct placement of my hands.

Type in the Dark

This dramatically improved my typing and one of the ways you can test that your gaze isn’t falling down to the keyboard is to type in the dark which I did and I realised that it was just as easy to type as if I had the light on.

Which Typing Test to Use?

If you search typing test online you get hundreds of results with the majority of websites looking nearly identical. All the free typing tests work a little differently from each other but each of them has you type sample sentences, phrases, or words, in a set period of time. To write this article I tested the top ten sites when I searched ‘typing test’.

The first one that appears at the top is one called typingtest.com and I have used this before to test my speed as it has several different modes: a 1, 3 or 5 minute test or a 1,2 or 3 pages test. However it looks like something meant for primary school children with very simple graphics, animations and a bold colour palette. On the other hand the screen is easy and large enough to see, the ads are not distracting, and you can see clearly how much time you have got left, your speed in wpm, and the number of errors you’ve made. When I completed the 1 minute test I got 43wpm with an accuracy of 96%. This places me just above average.

Second in the list though was a more modern website called typing.com which seemed to be an upgrade from the first one. This compared single letters which made it more accurate. Also the text to copy was large and easy to read with a simple font. The typing speed test at Typing.com gives you lots of easy and some difficult words, so it’s less like you’re writing random words and more like you’re rewriting a story. On this I got 53wpm which I think was a little high. I felt this was better than the first test as I found it easier to read and type which could be why my score is higher. However the problem was that it is a free website as so there were very large ads scrolled across the top and left hand side which made it slightly distracting.

Next I tried eight more websites which all mostly plain text with not much colour and no graphics with quite a lot of advertising on them. These all appeared to be quite old and the only thing that was really different about them was the text to copy. Some made you write out definitions and others made you type out individual words. A list of the sites I tested is below.

The problem with making a typing website is that you really can’t make it stand out from the crowd unless you have enough money to provide interesting graphics and animations.

A few of the sites in an attempt to stand out now offer online lessons in the correct way to type as well.

The problems are with the more basic sites though is that the font is outdated making it more difficult to read and you are typing into a text box at the bottom making it hard to read what you are typing. Furthermore a few made typing noises when you hit your keys which is very distracting to the person typing and I just found annoying.

Overall though I think that the best site that I tested was typing.com as it had a more modern approach with a large clear font. It also did typing lessons as well making it a multi-functional website. I also tried the typing course on it and found that it was quite good as it had plenty of lessons and practice that you could do to improve your typing speed.

The problem with the one minute typing test though is that it isn’t very accurate compared to a five minute or page test. The range of the results that I got was quite large going from 40wpm to 53wpm which is quite a large difference. To make my score more accurate I then did a 2 page test on typing.com and got an average of 47wpm.

In the future though I hope to improve and get up to around 55-60wpm as this will make me able to write essays quicker and able to type effectively at the speed someone is speaking at. I find that I easily type a ‘q’ and ‘n’ incorrectly so these are the keys that I need to practice to make my typing more efficient. I think that doing the tests every so often can be beneficial as it can show you whether you are improving or not.